Kushtia man, who set himself on fire outside Press Club, dies

A 45-year-old man from Kushtia who set himself on fire in front of the National Press Club on Monday to protest a company’s alleged refusal to pay his dues, succumbed to his injuries early on Tuesday morning. Kazi Anis, a vendor on contract from Kushtia's Kumarkhali upazila, who was kept on life support at Sheikh Hasina National Institute of Burn and Plastic Surgery died at 6am, said Bacchu Mia, inspector in-charge of Dhaka Medical College and Hospital police outpost. Also read: Kushtia man sets himself on fire in Dhaka Kazi Anis took the extreme step at 5pm on Monday "out of frustration" after Henolux, the company, refused to settle his dues of Tk1.26 crore, according to some journalists. Journalists and law enforcers present at the scene poured water on him and rushed him to Sheikh Hasina National Institute of Burn and Plastic Surgery in a critical condition. Also read: N’ganj factory fire under control Anis had suffered 85 percent burns, according to doctors. 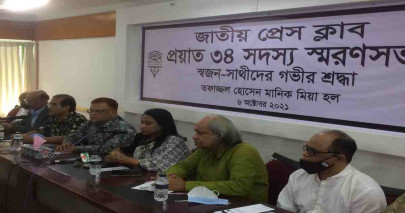 The Jatiya Press Club (JPC) on Wednesday paid tributes to its 34 members who died over the last one year amid the pandemic. At a memorial meeting, senior journalists and Press Club leaders also recalled the contributions of the 34 club members to the nation and journalism. Read: Jatiya Press Club gears up to celebrate anniversary As part of JPC’s two-week programmes to mark its 67th founding anniversary, the meeting remembering its members who died in between October 24, 2020 and October 5, 2021, was organised at an auditorium of the club. JPC president Farida Yasmin, acting general secretary Mainul Alam, its former president Saiful Alam, ex-general secretary Quamrul Islam Chowdhury, senior journalists Monjurul Ahsan Bulbul, Abul Kalam Azad, Abdul Jalil Bhuiyan, Omar Faruk and some family members of the deceased spoke at the programme. The 34 JPC members who died over the last one year include Hasan Shahriar, Zahiduzzaman Faruque, AU Fakhruddin, Fakir Abdur Razzaq, Abul Hasnat, Ershadul Haq, Hannan Khan, Khandaker Muniruzzaman, Humayun Sadeque Chowdhury, Khondaker Ataul Haque, Mizanur Rahman Khan, Hilali Wadud Chowdhury, Syed Lutful Haque, Ahmad Akhter, Shaheen Reza Noor, Syed Abul Maksud, Atiar Rahman Atik, AZM Anas,  M Nurul Huda, Atiqullah Khan Masud, Kayum Khan Milon, Khondaker Shahdat Hossain, M Rafiqul Alam, Enamul Haque, Syed Shahjahan, Khandaker Fazlur Rahman Feeuri, Shahiduzzaman Khan, Muhiuddin Ahmad, M Ruhul Quddus, Lutfur Rahman Binu, Bazlul Karim, M Abdur Rahim, Golap Munir and Hamiduzzaman Robi. Speaking at the programme, JPC president Farida Yasmin said it is very painful and tragic that 34 JPC members died in just one year. “They all were our near and dear ones. The death of so many members in a year is a rare and sad chapter in 67 years history of the club.” She said the club as well as journalism suffered an irreparable loss with the deaths of so many journalists. “All of them were established journalists and they made huge contributions to their profession and the country. They could have contributed more had they been alive. We recall all of their contributions and pay homage to them.” Saiful Alam, the editor of the Daily Jugantor, said the JPC should always remember its late members who founded the basis of this organisation and the journalism profession in Bangladesh.  “But we easily forget them and hardly remember them, except a few ones.” He thanked the JPC managing committee for arranging such a programme as it did last year and hoped the future JPC committees will continue it. “If we can follow the good works and ideals of those who died and move ahead following the examples set by them, and then arranging such programmes will be meaningful,” Saiful observed. Monjurul Ahsan Bulbul also recalled the role of the 34 late JPC members in enriching the profession and the Club through their works. “We pay our deep tributes to all the deceased members of the club and express our sympathy to their bereaved family members,” he said. Speaking at the programme, family members of the deceased thanked the JPC authorities for arranging such a programme. JPC also arranged a similar programme last year remembering its 18 members died that year.

Information and Broadcasting Minister Dr Hasan Mahmud on Monday laid emphasis on strengthening people-to-people contact between Bangladesh and India.  While inaugurating the Bangabandhu Media Centre at the Press Club of India (PCI) in New Delhi, he said the Centre will facilitate efforts to boost ties among people of the two countries, especially journalists. Minister Hasan said the relationship between Bangladesh and India reached a new height under the leadership of Prime Minister Sheikh Hasina and her counterpart Narendra Modi.  He, however, said they still have to work to strengthen people-to-people relations, and the Centre will definitely strengthen the ties between the two countries. The Information Minister depicted the short life sketch of Bangabandhu Sheikh Mujibur Rahman, the Father of the Nation of Bangladesh in his speech.  Bangabandhu guided Bangladesh to the path of Liberation and the country would not have been born if Bangabandhu were not born, he mentioned.   He also expressed his special thanks and gratitude for the contribution of India to our independence.  The Minister mentioned the role of journalists and media is very important for enhancing the bilateral relationship of India and Bangladesh. A documentary on the life of Bangabandhu was screened at the inauguration programme. Read: Inauguration of Bangabandhu Media Centre at Press Club of India Monday Earlier, he inaugurated the “Bangabandhu Media Centre” at the Press Club of India (PCI). An emergency meeting expressing concern over the security of the National Press Club members was held on Monday. Bangladesh vs India ODI: Shakib strikes twice, Rohit and Virat out within 3 balls